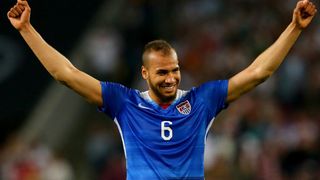 United States coach Jurgen Klinsmann insists John Brooks will only get better after making a big statement at the Copa America Centenario.

Brooks was voted man of the match for his performance in USA's hard-fought 1-0 win over Paraguay, which saw them qualify for the quarter-finals despite playing almost all of the second half with 10 men.

The 23-year-old has been one of hosts' best so far during the special-edition centenary tournament after establishing himself as a Hertha Berlin regular in the Bundesliga.

Klinsmann is optimistic over USA's future, with several younger players making their way into the national team set-up.

"It is fun to see young players coming through," Klinsmann said on Wednesday ahead of their quarter-final clash with Ecuador in Seattle.

"I think John Brooks, for a performance like that, all of Europe is watching. That was a big statement.

"We are very optimistic about his future. He is a young player, very eager to learn and a good listener.

"Now he is becoming more consistent in everything he does. Players just learn at that age how to live a professional lifestyle.

"It is a big learning curve. He will only get better."