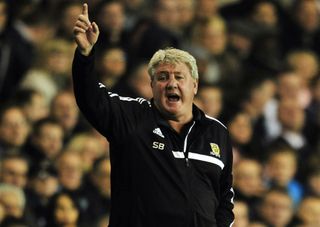 Bruce was left enraged when referee Michael Oliver penalised Ahmed Elmohamady for handball and Roberto Soldado made no mistake from the resulting penalty at White Hart Lane with the only goal of the game.

"It's a joke decision," Bruce seethed after the game.

"I shouldn't say this and I might get fined, but would we have got it? I'm not so sure."

The FA have started disciplinary action against the 52-year-old, as a statement on the organisation's website read: "It is alleged Bruce’s comments called into question the integrity of the match referee, and/or implied that the match referee was motivated by bias; and/or brought the game into disrepute, in contravention of Rule E3(1).

"Bruce has until 6pm on November 4 to respond to the charge."

After a 2-2 draw in extra time, Elmohamady was again at the centre of things, missing the crucial penalty as Spurs triumphed 8-7 in the shootout.