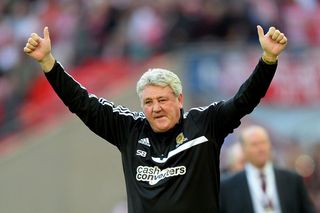 With three games left, Hull are five points clear of the Premier League relegation zone and looking forward to another campaign in England's top flight.

The Yorkshire club, who finished second in the Championship last term to gain promotion to the Premier League, will play in their maiden FA Cup final next month against Arsenal, and will aim for their first major trophy.

Owners Assem and Ehab Allam have led the tributes to Bruce, who took over in June 2012.

"He has proved to be a very good manager this season. We brought him here because of that, and he has lived up to his reputation.

"He has exceeded all our expectations this season.

"But then we have also exceeded our expectations by spending what we have."

Hull have spent over £20million since clinching promotion, including mid-season purchases Shane Long and Nikica Jelavic, and the club's CEO is thrilled with how Bruce has utilised the talent at his disposal.

"Under Steve's leadership he has got the team working the way he wants it," said Ehab.

"It has very much been a good team effort."

Ehab's father Assem added that if Bruce had failed it would have reflected badly on the owners.

"Steve has built a team the whole community can be proud of," the majority shareholder said.

"Football is like business, you stand or fall by your decisions. If he had failed, we would have failed."