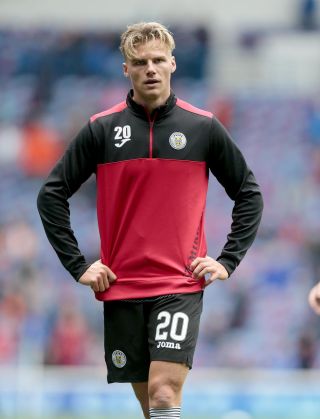 Cody Cooke insists there is more excitement than pressure at St Mirren ahead of the crunch Ladbrokes Premiership clash with Dundee on Saturday.

The Buddies are in the relegation play-off spot but their 2-0 win over Hamilton on Monday extended their unbeaten run to five games and took them to within one point of Accies with one set of fixtures remaining.

While Oran Kearney’s side travel to face the already-relegated Dens Park side, Hamilton are at home to St Johnstone and a win for Brian Rice’s team would guarantee that St Mirren would have to face either Dundee United or Inverness in the play-off.

However, Cooke insists there is no negativity in the Paisley camp.

The 26-year-old attacker said: “The general feeling is excitement at the moment.

“The boys are buzzing, you can tell from training in the last couple of weeks, the results have gone our way and excitement is the one, the feeling is good.

“When you can have an impact and control certain things it is more excitement than pressure and everyone is looking forward to it.

“Although it is not in our hands we have every belief that we can go there and get a result and we have to wait and see what happens.”

Cooke played for Truro City in the National League South in England, and is the last remnant of the group of players Alan Stubbs brought in last summer before he departed early in the season.

After a disrupted campaign, Cooke believes the Buddies fans will see the best of him next season.

He said: “I have kept my head down and kept grafting. It is more to do with injury that I haven’t been in the plans this season.

“I have managed to get more game time in the last few months. Hopefully I will have my best season next year.”