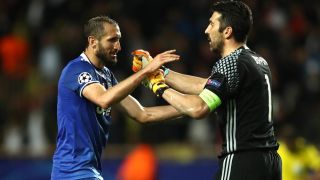 Goals in either half from Gonzalo Higuain saw Juve record a 2-0 win at the Stade Louis II on Wednesday.

But Buffon, 39, was instrumental for the Serie A champions, making numerous saves to put them in control of the tie.

Jardim's team have been prolific this season, but were unable to get past Juve and Buffon, and the Monaco coach said the shot-stopper was key.

"Juventus started well. They were better than us in the first 10 or 15 minutes. But then, the match was more even," he said.

"We had more possession, we played more in their last 30 metres. But I think that the clinical finishing made the difference.

"And Gianluigi Buffon produced some great saves. Our lack of goals is because of him. He produced two or three wonderful saves. Juventus didn't concede a goal thanks to his efforts."

Higuain's brace leaves Monaco battling to reach the decider ahead of the return leg in Turin next week.

Jardim retains some belief his team can advance, but admits their chances are slim.

He said: "I have talked to the players. It is difficult now, but I told them that we have to believe, even if we have only a five per cent chance to qualify for the final.

"And the best way to keep believing is to win against Nancy in Ligue 1 on Saturday. If we win there, we will have more motivation for the second match against Juventus."