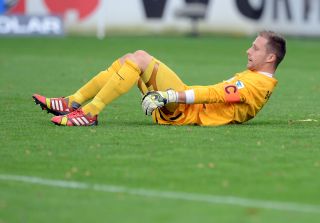 The goalkeeper was arguably at fault for all three of Hamburg's goals as Freiburg slipped deeper into the relegation mire.

Baumann's difficulties began on 37 minutes when a moment of madness saw him race off his line and misjudge a long ball from the back of the Hamburg defence, allowing Maximilian Beister to slot into an empty net.

A miserable performance was completed when Baumann spilled a Beister shot into the path of Rafael van der Vaart, who applied a cool finish to find the net.

Hamburg were therefore able to celebrate only their second win of the season, while Freiburg continue to seek a first victory.

In the day's other game, Eintracht Frankfurt's five-match unbeaten run was brought to an abrupt end as a rampant Borussia Monchengladbach ran out 4-1 winners at Borussia Park.

Things got better for Lucien Favre's side in the second half, when a dominant performance culminated in goals from Patrick Herrmann and Raffael.

Borussia's win was their fifth in succession on home soil and lifted them up to fourth in the table.