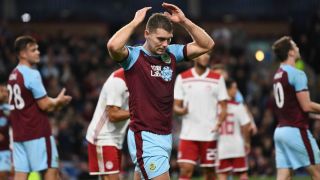 Burnley were made to rue missed chances as two late goals resulted in a 1-1 draw at home to Olympiacos, bringing their first ever Europa League campaign to a premature end 4-2 on aggregate.

A 3-1 defeat in Greece last week gave Burnley a lot to do and, after spurning a couple of glorious first-half chances at Turf Moor on Thursday, the lively Daniel Podence finished them off in the 83rd minute, with substitute Matej Vydra's equaliser insufficient to get them into the group stage.

Although the visitors started brightly and looked dangerous when Podence picked up possession in the final third, Burnley soon took charge and only poor finishing prevented them from going ahead.

Sam Vokes was particularly culpable, heading over from close range in the 23rd minute and doing so again five minutes later.

Vokes then turned supplier just before the break, latching onto a pass in behind the defence and squaring to Ashley Barnes, whose first-time effort went harmlessly wide.

Burnley seemed to step things up another notch after the break – Vokes striking the post with a sumptuous long-range effort, with Dwight McNeil following his lead and testing Andreas Gianniotis from 25 yards.

As Sean Dyche's men became more desperate towards the end, Olympiacos found wider spaces in the final third and Podence punished them by finishing emphatically in the penalty area.

Vydra at least salvaged a draw in the 86th minute when he bundled home, but it was too little, too late for the Premier League side.