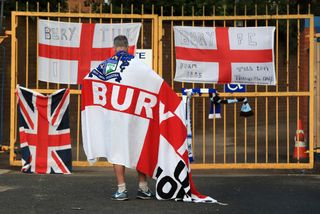 Bury insist a winding-up order looming over the future of the club will be dismissed next week and that they will remain in existence ready for next season.

The Shakers had their membership of the English Football League (EFL) withdrawn in August due to financial problems.

On Wednesday, HM Revenue and Customs’ bid to wind up the club was adjourned in the High Court in London, with judge Mark Mullen saying he would reconsider the case on October 30.

In a strongly worded statement on the club’s website, Bury believe this petition will be dismissed and that there are no plans to set up a ‘phoenix’ club or benefit from any fundraising by volunteers.

Supporters’ group Forever Bury director Dean Hamer described the decision to adjourn the winding-up petition as “death by a thousand cuts” and that the club should have been liquidated in order to set a phoenix club.

Last week it emerged Bury’s bid to apply for entry to the National League system had been given the backing of the Football Association.

However, the club on Friday suggested they were unaware of any fundraising efforts and are not involved with such proceedings.

The statement read: “The club would like to make clear the following and quash any rumours:

“Bury Football Club is not dead as some are asserting and will again be playing football.

“Steps are being taken to address the recent wrong doings to our club, the truth will prevail.

“Our pitches at Gigg and Carrington are in first-class order ready for next season, work will start on our stadium once the Day/loan situation is resolved.

“The legal cases against people are ongoing but looking very positive, alas not as quickly as we would like.

“The winding-up order should never have been issued and would have been dismissed on the day but unfortunately, HMRC had not finalized processing the returns and an adjournment was granted to accommodate this, it will be dismissed this week coming.

“The press made the above sound like others were involved, it was a quick court hearing and lasted minutes. No other party influenced the case or made a claim.

“Our club has no affiliation with these alleged phoenix/start-ups.

“The club can also confirm it has never been involved or been consulted in recent fundraising allegedly for our club or indeed has it benefitted from any fundraising by Forever Bury or any other entity, we are unsure where these proceeds go but it isn’t to help Bury Football Club, so please be advised if that is what you thought.”