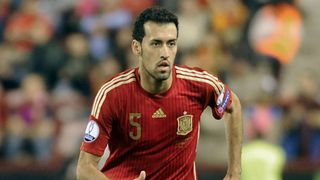 Spain midfielder Sergio Busquets has pinpointed Barcelona team-mate Arda Turan as the man to watch when the European champions take on Turkey on Friday.

A late goal from Gerard Pique enabled Spain to see off Czech Republic in their opener and they know a second win will put them into the last 16.

But Busquets is wary of the threat posed by Arda, who came in for strong criticism in his homeland for his performance in the 1-0 defeat to Croatia.

He said: "I have not spoken to Arda, but I saw a different game [to the critics]. He was Turkey’s best player, not with goals but with his play.

"I am sure the national team know what he can bring. After the first game, he got a lot of criticism and that’s difficult for a footballer.

"We know everything he has given for his national team and for one bad game it's difficult to be criticised like that.

"We know his quality and we will have to watch him closely as he can make the difference."

Juanfran, who played with Arda at Atletico Madrid before the latter's switch to Barca, echoed Busquets' warning.

"For Arda I only have good words," he said. "I enjoyed many years with him at Atletico. If he has a good day he will be difficult to stop and we have to be focused to ensure he doesn't have too much of the ball.

"His country is very demanding of him, they expect the best. We have a lot of affection for him but we hope he does not have a great game.

"Turkey is not only Arda, though, they must be respected as a team."

Busquets denied suggestions it would be a failure on Spain's part if they do not win Euro 2016.

"Not to win is not a failure," he added. "We don't want to repeat what happened at the 2014 World Cup [in which Spain exited at the group stage].

"Only one team can win but we want to go as far as possible and if you win all the better.

"We feel good after the first game and hopefully that will continue. Why can't we win it?"

Juanfran is expecting a difficult test against Turkey.

The Atletico full-back said: "We have a lot of respect for Turkey, their players and squad. We know the quality they have, how passionately they play.

"If we want to win we will have to play a better game than we did against Czech Republic."