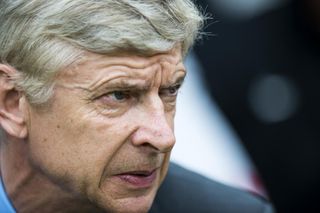 The under-fire Wenger was terse with reporters when quizzed about Arsenal's failed £10 million bid for Cabaye, which was dismissed as disrespectful by Newcastle manager Alan Pardew on Monday.

Asked about his interest in Cabaye ahead of Arsenal's Champions League qualifying play-off with Fenerbache on Wednesday, a prickly Wenger said: "There is nothing to explain.

"So it's quite amazing when all the people don't know and are giving their opinions on things they don't know.

"I don't have to explain to you what happened and it's now down to me to explain every single thing I do. It's impossible."

Wenger launched a passionate defence of Arsenal's record in the transfer market and urged fans not to worry, confident he will add to the squad before the end of the transfer window.

The London-based club have only signed little-known French striker Yaya Sanogo in the European summer transfer window after a host of failed bids to lure players to the Emirates.

Arsenal fans have been heavily critical of Wenger for his lack of spending but the veteran boss is adamant he will strengthen and have the right balance in his squad for the rest of the campaign.

"I live in a public job where I have to accept the opinions of everybody. Is it fair or not fair?," Wenger said.

"It's down to everybody who has an opinion to do that. I do with full commitment what I think is good for the club and for the team and that means prepare for the next game.

"Less than two weeks is a long time, 75 percent of things (transfer dealings) happen in the last 10 days.

"A squad has to have the right numbers, not enough players and it's not good, too many and there is no competition anymore, which is not good as well.

"We will have the right balance when the transfer market closes don't worry."