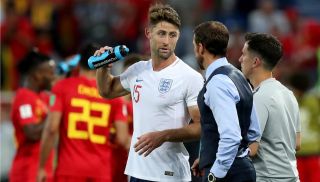 Cahill has made only one appearance in the World Cup for the Three Lions, playing the full 90 minutes as a much-changed team lost to Belgium in a dead rubber group game.

The 32-year-old, capped 61 times by his country, had been a surprise inclusion in Southgate's squad after falling out of favour at Chelsea during last season.

Speaking to Sky Sports after Wednesday's semi-final defeat to Croatia, he said: "I'm going to have a good conversation with the manager about the future in the coming month.

"But I can finish my England career knowing I've played every possible fixture I can play in the times I've been selected.''

The most-capped player in England's squad, Gary Cahill, has told one thing missing from his career is a successful tournament with the national side.Watch the full interview here: June 15, 2018