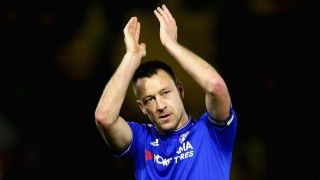 John Terry's expected departure from Chelsea will be "a blow" to the club on and off the field, says defensive partner Gary Cahill.

The Stamford Bridge stalwart may have played his last game for the club as he is suspended for the final-day fixture against Premier League champions Leicester City.

Terry announced in January that his contract would not be renewed and, though the 35-year-old has spoken of his wish to remain when new boss Antonio Conte takes the helm, his future is unclear.

"No player is going to play on forever, and there comes a time where you have to move on, or retire, or move clubs, or whatever it is going to be.

"But to replace someone like him is going to be difficult, not only as a player but as a character too, in the dressing room. But like I said, there is a time where that happens, and that is natural. You see that with the likes of Steven Gerrard at Liverpool, these players are very hard to replace.

"Will anyone achieve what he has achieved as a captain at Chelsea football club? Probably not. It's something remarkable. Of course in all the fans' eyes he will be thought of for many years and obviously never be forgotten."