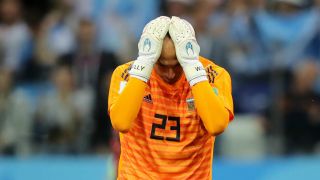 If Argentina are going to survive in this World Cup, they need fresh impetus, a new system, and certainly a new goalkeeper.

Willy Caballero was never meant to be their number one in Russia but the injury to Sergio Romero forced coach Jorge Sampaoli to make a choice. He went with the 36-year-old, who only made his international debut in March. After Thursday's 3-0 defeat to Croatia, that decision may have cost his side a place in the last 16.

Caballero has had a fine career but the warning signs have been flashing brightly. He shipped five goals against Spain in that humiliating 6-1 friendly loss in Madrid before these finals, and he seemed to create a constant unease in their surprise opening draw with Iceland.

What happened in Nizhny Novgorod was an error of an altogether different category. With the ball trickling back towards his goal, Ante Rebic giving chase, all the uncertainty about his own form seemed to cloud at once around Caballero's shining bald head. He neither cleared to the sidelines, nor found a team-mate; instead, he chipped the ball up and into the perfect striking distance for Rebic, who volleyed sweetly into the net.

Caballero's face was immediately in his hands. Sampaoli mirrored the gesture on the bench, as did approximately 10,500 Argentina fans who had made the stadium a cauldron of noise until then.

Argentina's malaise cannot be blamed entirely on the goalkeeper, of course. They were better than they were against Iceland here for the first hour, but drastically short of good enough. Possession and high pressing is only useful if it leads to chances, and the only one of note fell to Enzo Perez in the first half, who fluffed his lines horribly.

Sampaoli has continually tinkered with his system and line-up in a bid to bring the best out of Lionel Messi. This time, he switched to 3-4-3, adding flying wing-backs to aid the Barcelona star and Maximiliano Meza in the wide positions, who in turn supported Sergio Aguero. The fact the Manchester City man spent 21 minutes and 11 seconds of the first half without touching the ball says enough about how successful the plan was.

In the aquatic-themed Nizhny Novgorod Stadium, this had felt like a watershed moment for Sampaoli's Argentina. The deafening support of the travelling fans was commendable, especially after the Iceland disappointment. The ground itself is even blue and white, both outside and in terms of seat colour.

It was a home away from home, wrecked by a goalkeeping calamity, an uncertain system and a stunning strike from Luka Modric. Caballero could not even redeem himself in injury time, his low save to deny Ivan Rakitic sending the ball straight to Mateo Kovacic, who teed up the Barcelona man for a tap-in. Messi watched on from the halfway line, scarcely reacting at all.

Argentina's World Cup is not over yet. A win for Nigeria over Iceland, or even a draw, in Friday's Group D match would help their cause. But forgetting this Nizhny nightmare will take some doing.