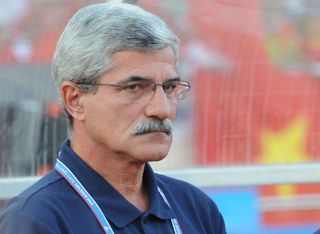 The 60-year-old was unveiled as the replacement for Costinha on Wednesday with the club bottom of the Primeira Liga after their opening eight matches.

Calisto previously won promotion to the Primeira Liga with the club in 2000 and guided them away from the foot of the table to a 10th-placed finish during his last spell in 2012.

Pacos finished third in the Portuguese top flight, reaching the UEFA Champions League qualifying rounds as a result, although they dropped to the Europa League after defeat to Zenit St Petersburg.

Defeat to Vitoria Guimaraes on Monday cost former Portugal international Costinha his job, and Calisto has stepped in to help the club preserve their top-flight status.

"I do not see no harm in returning to try to put things right," he said.

"Obviously I will not have been the only option for the club, but the history and support of many people I have here (will have helped get the job).

"(We will) analyse the situation and establish strategies for their resolution."

Calisto's first challenge will be lift morale within the squad ahead of their clash with Arouca on Sunday, where a win could see them move level on points with their opponents.