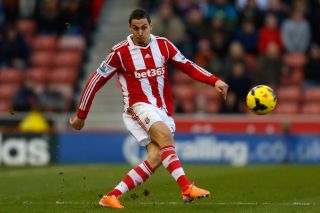 Stoke have acquitted themselves well in Mark Hughes' first year as manager, with the Staffordshire club on course to finish inside the top 10 in the top flight for the first time since gaining promotion in 2008.

Full-back Cameron has now set his sights on further improvement and wants to see Stoke return to the UEFA Europa League.

Speaking to Sky Sports News, he said: "I think the platform is to get higher next season, maybe finish in the Europa League (places).

"Then a year under Hughes's management, the way we've been playing, we've got the style under control now and the way we want to do things and maybe get into the top six."

But the United States international believes the team have shown a marked improvement as the season has progressed.

He added: "You can see in the games how we've played this season, it has been fantastic.

"It's been football with sharp one-twos, good touches, moving the ball from left to right to create things.

"It was hard for us in the beginning getting the opportunities to score goals but we're now creating the chances."