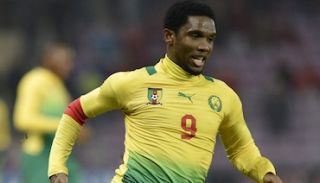 "Eto'o... has been recommended by his club to rest for a few weeks. So he will likely miss the match in Lome," said the German, who took over as Cameroon coach last month.

"But I'm sure he will be present for the match after that against DR Congo on June 16 in Kinshasa."

Cameroon lead Group I on six points, followed by Libya with five, DR Congo four and Togo on one point.