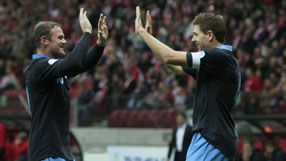 Speaking to the press post-match, Gerrard refused to blame his team's performance on the poor pitch – still clearly showing the effects of Tuesday's rain-forced postponement.

"Time will tell as we will have to see what happens at the end of the group but it's a decent point," claimed the Liverpool skipper.

"The lads are slightly disappointed because we know we can play better than that.

"It was difficult conditions and a difficult pitch but we can't use that as an excuse. The pitch was slippy, wet, cutting. I think it was laid a week and a half ago. So it wasn't ideal. Both teams tried to make the most of it and they did it better."

England went ahead in the 31st minute through a shouldered effort from Wayne Rooney, but the Three Lions could not hold on and conceded with 20 minutes remaining as Kamil Glik headed home.

The result leaves England top of Group H on eight points, although Montenegro are within striking distance on seven with a game in hand.

But Gerrard was not concerned with England's standing in the group, suggesting the trip to Warsaw would prove equally tricky for other teams.

"Our points tally could be better but this is a tough place to come. They are a fantastic team on the counter-attack.

"I don't think anyone in the group will come here and take maximum points. I believe this point will prove to be a good point."

Elsewhere, the FA has announced a scheme to reimburse fans affected by the game's postponement, which will be partially funded by national team players.