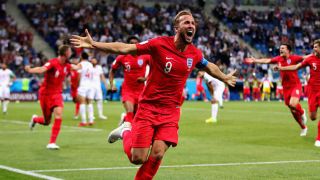 So often the question has been asked: Why can't England's top Premier League protagonists translate that form to major tournaments with the national team?

In Monday's dramatic 2-1 Group G win over Tunisia, Harry Kane took the first tentative steps towards confining that criticism to the history books and laying it squarely at the feet of those belonging to vintages gone by.

Time and again since the turn of the century, England's so-called 'golden generation' failed to deliver for their country in the way they had for their clubs - their campaigns often undermined by a poor opening showing that ultimately scuppered their chances of advancing beyond the group stage with any degree of confidence.

Or, as was the case in Brazil four years ago, advancing beyond the group stage at all.

Even throughout his fledgling international career, Kane has been singled out as a man who has teetered dangerously close to following that perilous path, failing to replicate his prolific Tottenham performances, which have yielded 105 league goals across the past four seasons.

But the captain came up trumps in Volgograd, netting the opener on the rebound from close range for his first goal at a major tournament, after 14 unsuccessful shots here and at Euro 2016.

A thoroughly-deserved opener for the , who'd gone close three times before the skipper finally broke the deadlock.Get in!  June 18, 2018

And, after Tunisia levelled through Ferjani Sassi's penalty following Kyle Walker's needless forearm to the head of Fakhreddine Ben Youssef, the Spurs man nodded home the winner in the 91st minute - his 10th England goal in his last eight outings.

It was a fitting finale to what had been an entertaining, if somewhat haphazard and erratic, affair.

On almost every occasion in recent memory, England's pre-tournament positivity has been swiftly punctured by a lacklustre opening display devoid of vim and vigour.

But this clash was anything but dull.

Gareth Southgate's side flew out of the blocks and ought to have led through Jesse Lingard after just two minutes, before Kane struck.

Walker's error halted their momentum but by half-time Southgate's men had fired in six shots on target - more than any other side at Russia 2018 and the most of any England team since that triumphant 1966 campaign.

6 - England have had six shots on target so far, their most in the first half of a World Cup match since the 1966 semi-final against Portugal (also six). Frustration.June 18, 2018

But Kane, Lingard, Dele Alli and Raheem Sterling only looked sporadically dangerous after the interval - the latter replaced by Marcus Rashford with a quarter of the contest left.

Just when it seemed England would have to settle for a draw - and what Southgate may have seen as two points dropped against an average Tunisia outfit - Kane was on hand to deliver a maximum haul.

Firmly established as one of European club football's top strikers, Kane joined the likes of fellow superstars Cristiano Ronaldo and Romelu Lukaku in making an early bid for the Golden Boot.

The only Englishman to win one of those is Gary Lineker - also the last man to score a World Cup brace for the Three Lions - and Southgate and co will hope their shining light does not fade on the global stage, like so many before him.