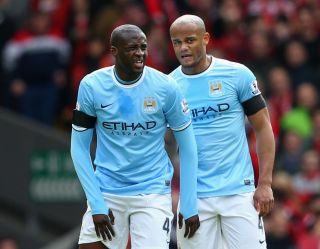 Midfielder Toure enjoyed a superb 2013-14 campaign, with his return of 24 goals in all competitions helping City to a Premier League and League Cup double.

The Ivory Coast international has failed to match those high standards so far this term, though, and his only goal so far came in the 7-0 rout of Sheffield Wednesday in the League Cup.

Toure's commitment to City was also called into question amid rumours of a falling out with the club during the close-season and he was tipped for a big-money exit.

However, City skipper Kompany insists Toure remains a talisman for Manuel Pellegrini's side and believes it is a matter of time before he shows his class.

"He's done so much for this club, he's always played brilliantly," he said. "He is always an important player - when he does well, the team does well.

"We've had a tough start because we've played tough teams. You can't deny that. He has set the standards very high for himself. But to say he is not at his best, then, I don't agree.

"It's so early in the season to call something like this. Things will improve for everyone."