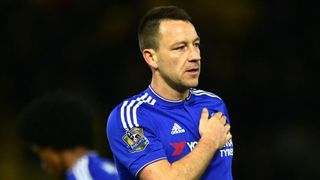 New Chelsea boss Antonio Conte has dismissed suggestions John Terry would have a "different role" at the club next season and confirmed the former England international as his captain at Stamford Bridge.

Terry gave careful consideration to signing a new one-year contract in May after claiming it had been offered on the understanding his role at the club would change.

However, Conte, who left his previous job as Italy head coach just 12 days ago following their elimination from Euro 2016 at the hands of Germany, made it clear the 35-year-old remains an influential figure.

He said: "John Terry signed a contract as a player, not as a different role. He is the captain of this team.

"He is a great player, with a great personality and great charisma. I like to speak with him because he knows this club, knows the right spirt to play at this club and he is an important player.

"All the players know I will use what I see on the training pitch to select my starting XI. If they deserve to play, they will play.

"John Terry is the captain of Chelsea. When he plays, when he doesn't play. Always.

"I repeat that John Terry is an important player for me, for the club, for the fans."

Chelsea confirmed Conte as their permanent successor to Jose Mourinho in April - Guus Hiddink was placed in interim charge after the Portuguese was sacked in December - and, after weeks of speculation, Terry was offered a 12-month extension not long afterwards.

And the former Juventus boss confirmed he played a role in that decision, adding: "All the decisions we take together – me, the club...

"I am pleased that John Terry signed a new deal with Chelsea.

"I spoke with him at different times and for me it was the most important thing that when John signed he was very, very happy."

Chelsea's only summer recruit so far has been Michy Batshuayi from Marseille and Conte is excited at the potential of the Belgium striker.

He said: "He is a young player but very strong with good technique. He uses two feet and is a great talent.

"I am very happy that Batshuayi signed with us and the club has a great player for the present and the future."

Conte refused to discuss his plans for the remainder of the transfer window, however.

"I prefer together with the club to take these decisions about a player who fits in with our idea of football, not just because he is a champion," he said.

"They must fit with our philosophy. It is not right to say the names of any players now because they are at other teams. I don't like managers from other clubs to speak about my players and I would not like to do the same."