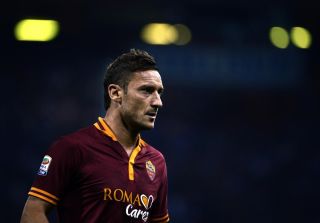 The 37-year-old sustained the problem during his side's 2-0 win over Napoli and was forced to sit out their victory over Udinese at the weekend.

The three points at the Stadio Friuli were secured by Michael Bradley's late strike, and stretched Roma's winning run in Serie A to nine games.

Totti has been integral in manager Rudi Garcia's plans this season, but faces a longer spell on the sidelines following further tests on the injury.

"Francesco Totti underwent tests this morning which showed the hamstring injury he suffered against Napoli is improving," a statement on the club's website read.

"The captain will continue physio and will be assessed again in the next 7-10 days."

Roma will therefore have to once again do without their skipper when they go in search of their 10th straight league win against Chievo Verona on Thursday.