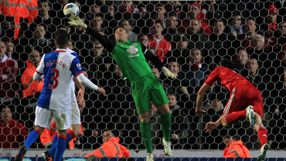 Carroll, under fire for his lack of goals since his 35 million-pound move from Newcastle United in January last year, headed home from six metres out with only three minutes on the clock to worsen their opponents' plight.

Blackburn remained in the bottom three on 28 points from 33 games, level on points with 17th-placed Queens Park Rangers and Wigan Athletic who have both played one fewer match, while Liverpool stayed eighth on 46 points.

The visitors started brightly and were two goals clear after Argentine Maxi Rodriguez clinically dispatched chances in the 13th and 16th minutes.

The game, and Liverpool's week with an FA Cup semi-final against neighbours Everton to come on Saturday, was disrupted nine minutes later when stand-in goalkeeper Doni conceded a penalty and was shown a red card for a foul on Junior Hoilett.

First-choice goalkeeper Pepe Reina will miss the weekend Wembley outing after he was given a three-match ban for a red card at Newcastle on April 2, leaving Liverpool with only one goalie in Brad Jones.

The Australian's first action was to save Yakubu's tame spot-kick and then point emotionally to the sky in honour of his son Luca, who died of leukaemia late last year aged five.

"The supporters have been brilliant. It's been a difficult 18 months with my son passing away. That was for him," Jones told reporters.

Yakubu pulled one back for Blackburn with a header on 36 minutes while in the second half Jones went from hero to villain, conceding Liverpool's second penalty in calamitous fashion when he palmed a charged-down clearance straight to the striker.

Jones then pulled former Middlesbrough team-mate Yakubu down and could have seen red but escaped with a yellow card and was powerless to stop the Blackburn marksman's drilled penalty just after the hour.

With the game meandering towards a draw Liverpool defender Daniel Agger's header into the path of Carroll gave the out-of-sorts England man a glorious chance to score which he duly took for the three points, a result he felt was never in doubt.

"We all believed we were going to get a winning goal at the end. Coming off a few defeats that shows the fire we've got," Carroll told Sky Sports.

"I think we've been unlucky and the luck will come back."