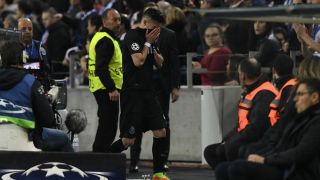 The full-back was sent off in the first half for two careless challenges within the space of two minutes inside the opening half-hour of the last-16 first leg at Estadio do Dragao.

The dismissal allowed Juve to assume control of possession and goals from Marko Pjaca and Dani Alves in the second half secured a commanding lead to take back to Turin for the return leg.

Casillas says Porto were punished for a loss of focus midway through the second half but felt they were given little chance once they had been reduced to 10 men.

"Playing against a team like Juventus with 11 is already difficult - imagine doing it with 10," he told Sport TV.

"It's clear that the game changed completely after the sending-off. We tried to take advantage of some chances at goal, using our speed, but we lost concentration a little and they took advantage.

"There was some mental fatigue. We waited two and a half months for this game and then everything was affected by the dismissal. They were also fouling us and they had no red cards.

"It's very difficult but now we have to think about the league."

Head coach Nuno Espirito Santo is refusing to give up all hope of a comeback, however, despite the daunting task of needing to score twice at Juventus Stadium to avoid going out.

"The sending-off of Alex was decisive because everything then became more difficult," he said. "But you have to note the way the team worked and knew how to handle their attacks.

"We gave it everything - that's the most important thing. The tie is very difficult but it's not finished."