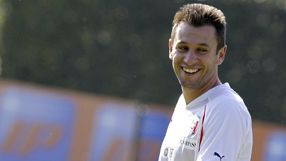 Cassano was passed fit following a scientific legal evaluation at the Institute of Sports Medicine in Milan, the Serie A champions said on Tuesday.

The 29-year-old underwent minor heart surgery in November after falling ill on the plane back from a match against Roma, sidelining him just as he had hit one of the best spells of his career.

Cassano was Italy's top scorer in the Euro 2012 qualifiers with six goals and has become a regular under coach Cesare Prandelli after he was overlooked by his precessor Marcello Lippi.

Born in Bari, Cassano has had a colourful career marked by tantrums and personality clashes but his early immaturities looked to have been ironed out when he joined Sampdoria from Real Madrid in 2007.

However, a verbal spat with the Samp president led to his suspension in 2010 and he joined Milan at the start of last year.

Cassano became a key factor in their Serie A triumph in May and was enjoying another good season until he fell ill.