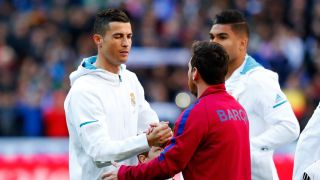 Ronaldo and Messi have dominated the sport over the past decade, splitting the last 10 Ballons d'Or as former players, pundits and fans debate the pair's standing among the best ever.

"I love Messi not as a counter-point to Cristiano, but because in my view he's the best of all time and the emotions he gives me are unique," former Italy international Cassano told Vanity Fair.

"If I have to rationalise it or convince you, I ask you to find me someone else who handles the ball and scores so consistently as Messi.

"Cristiano lacks nothing, let's be clear, but that's not the point. I love tennis. Now, Cristiano is like Nadal, a fantastic athlete built on talent, but also hard work and desire.

"Messi is more like Federer. He is pure artistry and class. They are different, and you can prefer one to the other. I am with Messi, as he can make the difference even when standing still, he almost doesn't need physical fitness."

"I also named my second child after Lionel," Cassano added.

Ronaldo scored 44 goals in all competitions in 2017-18 as Madrid won their third successive Champions League crown.

Madrid's all-time leading goalscorer, Ronaldo – who arrived from Manchester United in 2009 – helped deliver 15 trophies during his illustrious spell at the Santiago Bernabeu.

"He has these gifts from Mother Nature, but above all his mentality, the consistency of his training, his professionalism – all the things I hated," Cassano said.

"I admire him a great deal for his ability to always be focused. He'll remain in history forever as one of the greats and he deserved this success, because he earned it through talent, but above all through hard work.

"I was fortunate enough to play for Real Madrid when it was the team of the Galacticos. I know how it works there. Real is bigger than any one champion, even one who scored 450 goals, so I'm not surprised the sold him. They did without David Beckham, Ronaldo and Raul, so they can survive without him."

"Cristiano will have a wonderful new experience, Juve will pay him a rich salary, but are still happy because €100m for a player like that is a bargain," Cassano continued.

"He is 33 years old according to his birth certificate, but he looks after his physique so carefully it's almost maniacal. With the level of this Serie A, he can score 30-40 goals per season for a long while yet."