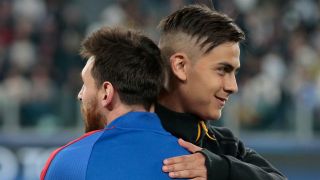 Antonio Cassano says it is a joke to compare Paulo Dybala and Lionel Messi, with the Barcelona superstar at another level to the Juventus forward.

Dybala's second full season in Turin saw him shine as the Bianconeri marched to a sixth Serie A title in a row, the 24-year-old scoring 11 goals across the campaign.

His low centre of gravity, creativity and quality in the final third led to suggestions he is the heir to Lionel Messi's throne with Argentina – and possibly Barca.

Despite rising tensions within the club amid concerns about his off-field behaviour, Dybala has continued to impress this season with 14 goals in 19 league appearances, but former Italy international Cassano thinks he remains a long way off Messi's level.

"He is a great player but not a champion," Cassano told the Corriere dello Sport.

"Last year when he was riding the crest of a wave he was compared to Messi and I was laughing.

"We cannot even joke. Please, Leo is another level. [Gonzalo] Higuain, [Miralem] Pjanic and [Gianluigi] Buffon are the only three champions in Serie A."

Cassano was also less than complimentary about Napoli head coach Maurizo Sarri, despite the 59-year-old leading his side to the top of the table.

Napoli hold a one-point lead over Juve, but that is not enough to impress former AC Milan, Roma, Inter and Real Madrid striker.

"Sarri makes a good team play well," he added. "But managing the champions and getting the results that [Massimiliano] Allegri, [Jose] Mourinho, [Carlo] Ancelotti, [Fabio] Capello and [Pep] Guardiola get is much more complicated.

Asked if he would like to be coached by Sarri, Cassano responded: "No."