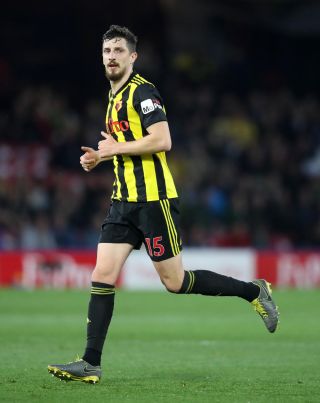 The Northern Ireland international joined Watford in 2014 when he left Blackpool, having also enjoyed a spell at the club on loan from Manchester United in 2009.

“I feel at home, I’m comfortable and it’s a family club,” the 30-year-old said on the Watford website.

“I enjoy coming here every day to work, it’s a nice atmosphere and when things are going well it’s even better.

“My family love living here and things are going well. We had a great season last season with the team, and everything is looking positive. I’m delighted to stay.

“The club has been on an upward swing since I’ve come here and I don’t want it to stop now, I want it to carry on.

“We want to push on again and be competitive as a team. You want to be successful as a team and as an individual player as well, and that’s what I’m looking forward to in the next four years, hopefully.”

Cathcart hopes Watford can build on a positive campaign under Javi Gracia, having reached the FA Cup final and also secured a highest Premier League finish of 11th place.

“(The club) can go as far as it wants to go. At the start of last season we set out to get into the top 10 – we didn’t get it, but that just gives us even more incentive this year to push on again, and the club’s always getting better,” he said.

“The stadium looks fantastic, it’s a great place for the fans to come and watch us.

“Every time you come back to the changing room for pre-season something’s moved, they are adding stuff on – it’s a really good environment to be in.”