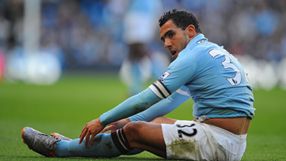 Manager Roberto Mancini's main concern against lowly Birmingham will a victory to consolidate their top-four position but fans of the club, despite the millions spent, could be forgiven for feeling short-changed in the entertainment stakes.

City have managed just seven goals in six home matches and have found the net only 15 times this season, a poor return and one that could undermine their hopes of barging into the title race.

Leaders Chelsea, who host Sunderland on Sunday, have scored 28, and second and third-placed Manchester United and Arsenal have bagged 24 each.

City ground out a timid 0-0 draw at home to United on Wednesday, wasting the perfect opportunity to lay down a marker against their illustrious rivals.

It was telling that United manager Alex Ferguson appeared disappointed that two points had been dropped while City's Roberto Mancini preferred to stress the fact that his side had avoided defeat.

"I thought Nigel de Jong played well, as did Gareth Barry," Mancini said of two of his defensive midfield shield. "It was good we did not concede any goals in stoppage time like we did last season."

For all the millions spent on players since City became the play thing of Sheikh Mansour bin Zayed Al-Nahyan in 2008 the club is struggling to throw off an inferiority complex and the team, while tough to beat, lacks personality.

Skipper Carlos Tevez has scored half City's goals this season and of the rest of the expensively assembled squad only Mario Balotelli, who is suspended for Saturday's clash with Birmingham, has managed more than one in the league.

England winger Adam Johnson was overlooked for a starting berth against United with Tevez again left to run himself into the ground.

Emmanuel Adebayor has looked a shadow of the player that used to terrorise defences at Arsenal and City get few goals from their defensively-minded midfield.

Despite City's caution, they remain well-placed on 21 points, seven behind leaders Chelsea, two behind Arsenal and three shy of United, none of the top three are firing on all cylinders.

They crossed swords many times when Houllier was in charge of Liverpool and the Frenchman achieved the rare feat of five successive victories over United from 2000-2002.

Houllier's return to English football has been low-key with mid-table Villa struggling for consistency and Wednesday's last-minute win over Blackpool was their first in the league since September.

Chelsea have been the mo