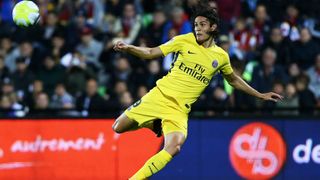 The Uruguayan and his Paris Saint-Germain team-mates face a stern test of their European credentials in the last-16 first leg against double defending champions Real Madrid at the Santiago Bernabeu on Wednesday.

Cavani has been in red-hot form this season, netting 28 goals across all competitions, including six in six as PSG topped Group B ahead of Bayern Munich.

Unai Emery's men were paired with Madrid in a mouth-watering tie but should they go all the way to the final in Kiev, Cavani wants to follow in the footsteps of Zidane - whose famous volley lit up Madrid's 2002 win over Bayer Leverkusen - and Mandzukic, who produced a stunning bicycle kick as Juventus were beaten by Los Blancos in Cardiff last year.

"It's clear. I've maybe not yet scored a scissor kick and I'd like to score one on the day of a major title for the club, in the final of the Champions League, for example," Cavani told Marca.

"I have scored all kinds of goals, but I'm missing this scissor kick."

PSG are yet to reach the final of Europe's premier club competition, but Cavani does not agree that a failure to lift the famous trophy is preventing the club from being considered among the continent's elite.

"I like this question. I believe a history and a myth has been created around the Champions League," he said. "Obviously it is the best competition, but for me the league is very important. It's the result of a whole year of work.

In their first season under Emery, PSG lost their grip on Ligue 1 as Monaco stormed to the title, while they were memorably dumped out of the Champions League following Barcelona's miraculous comeback in the first knockout round, but Cavani believes the Spaniard is the right man to deliver success at the Parc des Princes.

"[He brings] confidence, first and foremost. He is a coach who works in large part with motivation and this is essential and useful for a player," Cavani said. "In football and in life, you need to have confidence and Emery does a good job in this sense.

"To train a team with great players and huge signings is easy in some respects and difficult in other respects. New players arrive and it needs time. Emery brings a lot of positives."