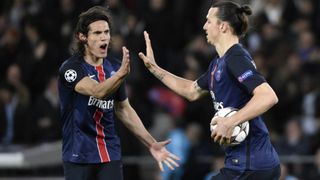 The Uruguay international has spent much of his career with the Ligue 1 champions playing in a wide role in order to accommodate the former Sweden captain operating as the spearhead of the attack.

With Ibrahimovic having left to join Manchester United, Cavani looks set to be deployed at the head of the forward line under new head coach Unai Emery.

But despite facing the prospect of having to get close to Ibrahimovic's haul of 50 goals in 51 appearances last season, Cavani says he feels no pressure in taking on the mantle.

"Pressure? No. Every player has his way of playing. I have no pressure," he told L'Equipe. "It's a personal challenge for me, to give the best of myself, to win titles, to score goals for my team and to help when needed.

"That's the opposite of pressure. It's an honour for me to be one of PSG's forwards.

"It's a great challenge to be faced with, to be part of the PSG attack in this central position. I will try to be at my best and to meet expectations, as I've tried to do in previous years.

"With the confidence of the coach and the club, I hope everything will go as we want.

"I'm not the number one in attack, but I am the attacker the club made a huge investment on and whose position has changed, for various reasons."

Cavani hopes to thrive in a more direct attacking approach under Emery, who replaced Laurent Blanc as head coach after guiding Sevilla to a third Europa League title in succession last season.

"He has a different system to our former coach," Cavani said. "From what I've seen in the past, Unai teams are attacking, they play direct. I think that's positive to my way of playing.

"Every coach has his philosophy. We'll see how it goes - we all know that it's results that bring about calm."

Cavani, who joined PSG from Napoli for a reported €64million fee in 2013, says he would be happy to extend his contract at Parc des Princes.

"I still have two years on my contract. I want to stay," said the 29-year-old. "The club presented a project to me when they signed me, and I really wanted to be part of it.