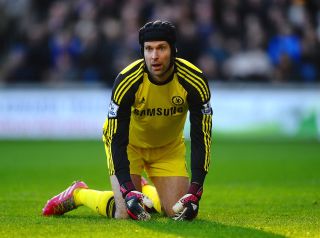 Jose Mourinho's side have won five consecutive matches and conceded only once in their last six following Saturday's 2-0 Premier League victory at Hull City.

While individual performances from the likes of Eden Hazard and Oscar have caught the eye in recent weeks for Chelsea, Cech feels it is their all-round work rate that allows their attacking stars to flourish.

"You need every individual to play for the team as well as using their own quality to decide games,' said Cech, who broke Peter Bonetti's Chelsea record on Saturday by keeping his 209th clean sheet for the club.

"We have so much talent in the squad (that) these things happen, if you work as a unit and a team these players can make the difference.

"Eden proved the difference with the first goal and then Fernando finished it off (against Hull)."

Chelsea sit a point behind Premier League leaders Manchester City in second, with the third-placed Arsenal able to move to the top of the table with victory at Aston Villa on Monday.