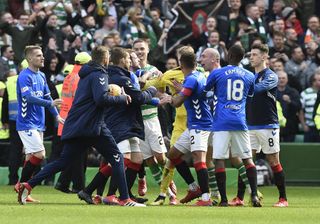 Celtic and Rangers have both been fined £7,500 over the on-field confrontation which followed their latest meeting.

The clubs received the same punishment at a Scottish Football Association disciplinary hearing after being accused of breaching rule 204 – where three or more players and/or members of team staff are involved in a confrontation with the opposition.

Players and staff from both sides, as well as stewards, were involved in pushing and jostling after Rangers left-back Andy Halliday confronted Celtic skipper Scott Brown over his celebrations immediately after the final whistle sounded on a 2-1 win for the Ladbrokes Premiership champions at Parkhead on March 31.

Aberdeen and Hearts were each fined £500 for the same offence last week, and both Inverness and Ross County recently received £2,500 punishments following a Highland derby confrontation.

Brown faced an SFA hearing last week over his celebrations from the March 31 encounter but his charge was not proved.

Aberdeen manager Derek McInnes also faced an SFA hearing on Thursday and received a one-match touchline ban after being dismissed following a gesture to Celtic fans at Hampden last month.

McInnes was sent to the stand during his team’s 3-0 William Hill Scottish Cup semi-final defeat after aiming an arm gesture at opposition fans. The Dons boss was reacting to a sectarian chant directed towards him.

The former Rangers player was given a misconduct charge and was handed a one-match touchline ban with a further game suspended until the end of next season.

💬 Derek – I’ll make comment after the hearing today and I’m just keen to get it resolved.— Aberdeen FC (@AberdeenFC) May 2, 2019

McInnes will serve the suspension during his team’s meeting with Celtic at Pittodrie on Saturday, when the league leaders could wrap up the title.

Speaking earlier in the day, McInnes said: “I will make comment after the hearing. I’m just keen to get it resolved really but I admitted and was apologising right away on the day.

“That hasn’t changed because I wish I hadn’t responded but I also feel there was a lot of real mitigating circumstances and I hope that gets looked at as well.”