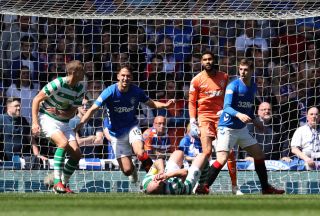 Celtic have branded the Jon Flanagan disciplinary matter a “huge embarrassment for Scottish football” after the Rangers defender escaped a two-match ban for elbowing Scott Brown.

Flanagan was initially yellow-carded for the incident but later issued with a retrospective ban after three former match officials declared his offence violent conduct after it was re-examined by Scottish Football Association compliance officer Clare Whyte.

However, Rangers challenged that assessment and an independent panel dismissed the case following an SFA disciplinary hearing.

A Celtic spokesperson said: “This whole matter is a huge embarrassment for Scottish football.”

Rangers welcomed the ruling but added a caveat.

An Ibrox spokesman said: “Obviously we have concerns about the process but we are happy that the correct decision has been upheld.”

Rangers had earlier criticised the SFA for getting involved after referee Kevin Clancy opted to book Flanagan after the full-back hit out at Brown as the pair awaited a Celtic corner.

Celtic manager Neil Lennon had argued the offence was a blatant red card but their city rivals vowed to defend their player “vigorously” while also questioning why Hoops defender Jozo Simunovic had also not been issued with a notice of complaint following an off-the-ball collision with Jermain Defoe.

Press Association Sport understands that the compliance officer also referred the Simunovic incident to the three former match officials but there was no unanimous agreement that he should have been sent off.

Rangers had condemned the outcome of the SFA’s initial response on Tuesday.

A statement read: “Once again, there seems intent to change the decision of a referee in a match involving Rangers.

“There seems to be a steady erosion of respect for Scotland’s referees and the authority they are meant to enjoy under rule five of the laws of the game.

“The decisions of referees regarding facts connected with play are meant to be final, but referees are now routinely invited to change their decisions after a game has finished.

“It is particularly shocking that another Rangers player has been singled out for retrospective action and issued with a notice of complaint, while Jozo Simunovic, the Celtic player who used an elbow to fell Jermain Defoe, has escaped any kind of censure.

“Why did one incident escape punishment while the other is now deemed worthy of a red card?

“We cannot understand how these two incidents could be studied yet only one be considered worthy of punishment.

“It seems as if Rangers’ players are being held to a different code of conduct from players at other clubs.

“We shall vigorously defend Mr Flanagan and have also asked for full transparency on what matters are brought forward for retrospective action. Are those decisions being made even-handedly?”