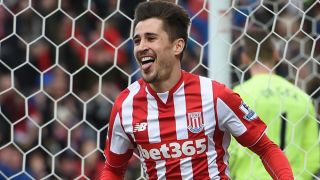 Bojan Krkic believes Stoke City must be ambitious and aim for Champions League football in the next few years.

Stoke are seventh in the Premier League table after 22 games and are just two wins off the top-four and a resulting spot in European football's most prestigious club tournament.

Bojan has been one of the club's best performers this season, contributing five goals in 18 league appearances.

The forward drew comparisons with this season's surprise packet Leicester City, and thinks the club should set themselves the target of European football within three years.

"We have to be honest. The Champions League has to be a target. You have to be ambitious," the 25-year-old told Sky Sports.

"Five years ago they could never imagine at the Britannia Stadium they'd play football, why in three years we can't be in the Champions League?

"Look at Leicester, they have a chance to win the Premier League. You have to be ambitious."

The Spain international, who spent two years in Italy and one in Holland before moving to Stoke, said it was always his aim to play in England.

"I was in two years in Italy and one year in Holland. I said to my family I want to come back to Spain, it doesn't matter where," he revealed.

"But it was a long summer [in 2014], and Stoke City start to call me and show interest. The Premier League is the best league in the world and I always wanted to play here.

"I spoke to [Stoke manager] Mark Hughes and he told me about the mentality at Stoke City.

"When I was young I said I wanted to play in the Premier League. Now I am here and I want to enjoy the football here."

Bojan praised the level of football in the Premier League and the respect of the fans compared to the other countries he has played in.

"Here 90 minutes one game is 100% intensity, in Spain no. In Spain you have maybe 60 minutes of high intensity," he said.

"It's a different philosophy with the fans and the journalists. There's more respect for the players.

"The players enjoy it more because every stadium is full. If you win the people are happy, if you lose the players don't wait outside the dressing room to say something to you."