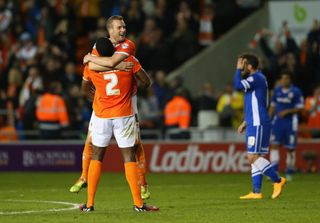 Friday's clash - a rematch of the 2010 play-off final - was set against a familiar backdrop of turmoil for the hosts, with fans threatening to walkout in the 53rd minute in protest at club owner Karl Oyston's alleged refusal to spend money on the team.

Cardiff, meanwhile, will have been eager to impress Russell Slade, who was watching on from the stands at Bloomfield Road ahead of his expected appointment as manager of the Welsh capital club.

But the visitors will have done little to impress their new boss on the Lancashire coast as they were frustrated by a determined Blackpool side.

Indeed, Cardiff dominated for long periods but they could not find a way through the Blackpool defence as Jose Riga's men gave those who did not participate in the planned walkout a rare victory to cheer.

And it was Ivorian striker Zoko that sealed the points in the 64th minute by jinking his way into the box and unleashing a hard low drive beyond Cardiff goalkeeper David Marshall.

Marshall kept Cardiff hopes alive a minute from time with a brilliant point-blank save from Nathan Delfouneso following great work down the right from Ishmael Miller.

But Marshall's heroics could not prevent Cardiff from slipping to defeat as Blackpool held on to seal their first triumph since April, which moves them off the bottom and above neighbours Bolton Wanderers.