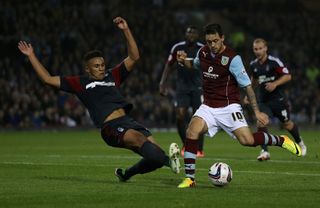 Sean Dyche's side will travel to Dean Court in good spirits after a 1-0 win at Bolton Wanderers on Tuesday.

Sam Vokes' second-half goal extended Burnley's unbeaten streak to eight matches in the league and his strike partnership with Danny Ings is one of the main reasons they occupy second position in the table.

The two strikers, who both had previous spells at Bournemouth, have scored 33 league goals between them this season – Ings having netted 18.

Either Vokes or Ings have scored in six of the club's last seven matches and they will be licking their lips at the prospect of taking on a side with the league's second-worst defensive record.

Bournemouth manager Eddie Howe – who left the south-coast club to manage Burnley in January 2011 before returning in October the following year – has seen his side concede 49 goals this season, with only Millwall having leaked more, and they have not kept a clean sheet in their last nine matches.

Burnley's match comes one day before QPR host Reading, a match that pits two of last year's Premier League sides against each other.

QPR will be favoured, given the contest is at Loftus Road, but with four wins in their last six, Reading have climbed into the play-off places.

Nigel Adkins' side sit sixth and played out a 1-1 draw against QPR in November.

Ipswich Town will be confident of continuing their good form when they host a desperately out of form Blackpool on Saturday.

Mick McCarthy has seen his side climb to eighth and they host a Blackpool side that have not won in 14 games – a run that dates back to November 30.

Millwall could move to 19th if they beat fellow strugglers Bolton and in Saturday's other clash, 13th hosts 12th in a truly mid-table clash, as Watford welcome Middlesbrough to Vicarage Road.