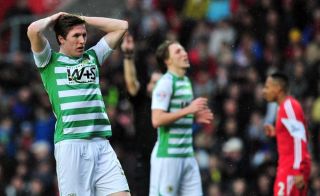 The fight for the sixth and final play-off spot is also hotly contested, but Yeovil Town and Barnsley could find themselves relegated to League One this weekend.

Yeovil have failed to cope in their first season in the second tier of English football, with an 11-match winless streak that followed their 1-0 win at Millwall on the opening day setting the tone.

Gary Johnson's men have been trapped in the bottom three since October 1 and will be relegated unless they win at Brighton and Hove Albion on Friday and both Birmingham City and Blackpool lose a day later.

Only a miraculous turn of events can keep Yeovil, who are six points adrift of safety with two matches to play, in the Championship.

Barnsley are two points ahead of the rock-bottom club but also up against it, and know failure to win at Middlesbrough on Saturday will cost them their place in the league.

The South Yorkshire outfit have made a habit of late survival runs in recent seasons but have been in the relegation zone since September 14 and look likely to suffer demotion in this campaign.

While Yeovil and Barnsley look likely to be relegated, the third and final relegation place should be decided on the final day of the season with five teams - from 18th-placed Charlton Athletic to Blackpool in 22nd - currently separated by just two points.

Blackpool topped the league in September but have nosedived ever since, picking up just two wins since December.

They play Charlton Athletic on the final day in a potentially crucial relegation clash, but will hope to pull off a shock at Wigan before then.

Birmingham are another side in poor form but could take advantage of the fact this weekend's opponents Leeds are safe.

Leeds have also dropped off dramatically since the turn of the year but will have little to play for at St Andrew's.

Six sides are within three points of each other as they battle for sixth and Reading, who are in pole position, can build a four-point gap with a win over Doncaster Rovers.