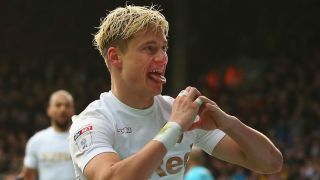 Leeds United maintained their fine start under Marcelo Bielsa with a 3-0 victory at Norwich City that took their points total to 13 from a possible 15.

Mateusz Klich and Ezgjan Alioski both scored in the opening half-an-hour and Pablo Hernandez added a third in the second half as Leeds moved above Middlesbrough to the top of the Championship standings on goal difference.

Stoke City gained their first victory since they were relegated out of the Premier League by beating Hull City 2-0 at the bet365 Stadium while QPR, who had lost each of their opening four fixtures, claimed all three points against Wigan Athletic.

Andreas Weimann scored the fastest EFL goal of the season so far when the Bristol City striker found the net after just 31 seconds, and that was enough to earn a 1-0 victory at Swansea City.

31 - Andreas Weimann’s strike versus Swansea City is the fastest league goal scored in the this season (31 seconds). Rapid.August 25, 2018

Norwich may hope their visitors' dressing room, now painted pink, will have a detrimental psychological impact on their opponents at Carrow Road, but it certainly did not work on Leeds.

Having dropped points for the first time all season in a 2-2 draw with Swansea on Tuesday, Bielsa's men got back to winning ways with a convincing victory on their travels.

There was plenty of intrigue around how Bielsa would fare in Yorkshire and so far there is no sign of his side letting up.

Leeds' first victory of the campaign came against a Stoke side who bookmakers had fancied to bounce straight back to the top flight.

And his Stoke side delivered as James McClean set them on their way with a ninth-minute goal before Jordy de Wijs scored a second-half own goal, with Hull's misery compounded by Evandro's dismissal for two yellow cards.

HEMED HAS INSTANT IMPACT AT QPR

Stoke were not the only side desperate for a win as QPR headed into their home game against Wigan having lost each of their opening four Championship games.

After being thrashed 7-1 by West Brom last weekend, Bristol City won 3-0 at Loftus Road on Tuesday to increase the pressure on manager Steve McClaren.

However, he can breathe easier following a 1-0 win over Wigan which was achieved through a 35th-minute goal from Tomer Hemed, who only joined on loan from Brighton and Hove Albion earlier in the week.