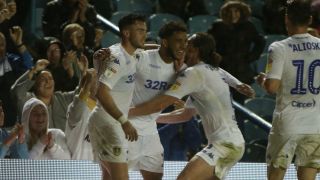 Leeds United moved three points clear at the top of the Championship with a straightforward 3-0 win over Preston North End, while Aston Villa swept Rotherham United aside 2-0 to end a recent barren run.

Perhaps the most compelling viewing of the day came at The Hawthorns, as West Brom ran out 4-2 victors over a Bristol City side who had won four on the bounce beforehand.

Wigan Athletic continued their good start to the season with a 2-1 defeat of visitors Hull City, while Stoke City overcame Swansea City - another of the relegated sides - 1-0, with Joe Allen scoring against one of his former clubs.

The other two matches finished level, as Brentford lost ground on Leeds with a 1-1 draw at Ipswich Town and Derby County were held to a goalless stalemate by Blackburn Rovers.

TABLE: Here’s how the standings look this evening…Happy, fans?  September 18, 2018

There was rarely any doubt about where the three points were heading in Tuesday's clash at Elland Road, with Marcelo Bielsa's men comfortably defeating Preston.

Liam Cooper's well-taken diving header gave them the lead just before the break and, although they had to wait for the other two goals, they were deserved.

Tyler Roberts doubled Leeds' tally 16 minutes from time with a clever lob over Declan Rudd, before getting his second of the day by heading in Mateusz Klich's cross.

Leeds' result was boosted by Brentford's draw, with Bielsa's side still unbeaten after eight league matches.

FULL TIME: The referee brings the game to a close, and the Elland Road crowd rise to their feet in applause. 3-0 to September 18, 2018

NEW FACES GET VILLA BACK ON TRACK

Steve Bruce's Villa had not won any of their previous five Championship games before hosting Rotherham, but the Yorkshire side were no match for them.

Villa made their superiority pay in the 27th minute when Tammy Abraham – making his home debut – finished after being played through by Jonathan Kodjia's fine throughball.

Yannick Bolasie – also featuring at Villa Park for the first time since joining the club – completed the scoring in the second half, heading in from close range.

Victory moves Villa back up to sixth.

Jay Rodriguez netted twice for West Brom as they defeated Bristol, getting things started 16 minutes in from the spot after Dwight Gayle was brought down by Adam Webster.

Gayle got in on the act by smashing in after a fine Harvey Barnes run and the on-loan Leicester City midfielder then set up Rodriguez's second in the 28th minute.

Lloyd Kelly pulled one back after an hour, but the impressive Barnes got a deserved goal three minutes later, blasting into the top-right corner following Gayle's cutback.

Famara Diedhiou curled in a second for Bristol, but West Brom had already done enough to move to within a point of Brentford.