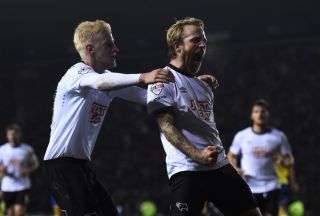 Steve McClaren's side had slipped off the summit with a defeat at Brentford a week ago, but after beating Huddersfield Town in midweek they ran riot against Kenny Jackett's side to lead the way again.

Wolves started the day in sixth spot, but slipped down to ninth after they were blown away by a clinical Derby side in the first game of the day in the second tier.

Goals from Ryan Shotton, Jeff Hendrick and Johnny Russell put the hosts in command at half-time and they carried on where they left off after the break.

Hendrick added his second goal of the game by rounding off a slick passing move, then the in-form Russell took his tally to four goals in his last four games as Wolves suffered their second consecutive defeat.

Bournemouth started the day at the top of the table, but their seven-match winning run in all competitions ended with a goalless draw at fellow high-fliers Middlesbrough.

Middlesbrough defender Adam Reach's long-range drive struck the woodwork, but Aitor Karanka's side were unable to secure a victory which would have seen them head into the international break at the summit.

Ipswich Town are up to fourth courtesy of a late Tommy Smith strike which consigned Watford to a 1-0 defeat at Portman Road.

Surprise package Brentford were 3-2 winners in a London derby at Millwall and a third victory of the week has enabled Mark Warburton's men to move up to sixth spot.

In-form striker Andre Gray's double ensured he has four goals in his last three games and left Millwall reflecting on a dismal record of just one win in their last 12 Championship games.

Neil Redfearn celebrated his first victory since being appointed Leeds United head coach on a full-time basis, as beleagured Blackpool were beaten 3-1 at Elland Road a day after the Yorkshire club had been given a winding-up order.

Lee Clark's Blackpool side are marooned at the bottom of the table with only seven points after goals from Liam Cooper, Souleymane Doukara and Mirco Antenucci ended Leeds' eight-game winless run.

Nottingham Forest also stopped the rot on Saturday, halting a sequence of 10 games without a win in all competitions as late goals from Britt Assombalonga and Michail Antonio consigned Norwich City to a 2-1 defeat.

Gary Rowett's encouraging start to his Birmingham City reign continued as Cardiff City were held to a goalless draw at St Andrews, but the game ended on a sour note for the home side when Wes Thomas was sent off for an altercation with Sean Morrison.

Charlton Athletic were 1-0 winners at Reading, Blackburn Rovers drew 1-1 at Brighton and Hove Albion and there were no goals in the Yorkshire derby between Sheffield Wednesday and Rotherham United.

Fulham climbed to 17th courtesy of a 3-1 home victory over Huddersfield Town.