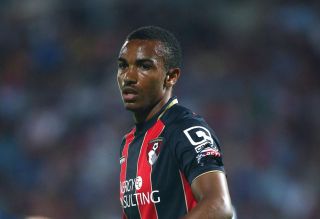 Eddie Howe's Bournemouth topped the early table on goal difference following a 4-0 thumping of Huddersfield Town on the opening day, and they maintained their position at the summit thanks to Junior Stanislas' winning goal 18 minutes from time against Brentford.

﻿The former Burnley man tapped home a cross at the far post to give the home side all three points and ensure the visitors must wait for their first win since returning to the second tier.

Millwall followed suit with a narrow triumph at London rivals Fulham as Martyn Woolford's 12th-minute strike proved enough for Ian Holloway's men to take all three points, while relegated Fulham are yet to get off the mark.

Huddersfield's dismal start to the campaign continued as, with Mark Lillis in caretaker charge following the departure of Mark Robins, they went down 3-1 at promotion-hopefuls Cardiff City.

Peter Whittingham put the hosts in front in the 28th minute and Kenwyne Jones added a second seven minutes later.

Murray Wallace gave Huddersfield fans some hope with a goal in first-half stoppage time, but Jones' second - his third in two matches - sealed the points for Ole Gunnar Solskjaer's men.

Blackpool are without a point after they went down 2-1 at home to Lancashire rivals Blackburn Rovers.

Rudy Gestede scored either side of half-time for the visitors, with Blackpool unable to force an equaliser after Tomasz Cywka pulled one back in the 53rd minute.

The other side in the division yet to register a point are Brighton and Hove Albion, who lost 1-0 at Birmingham City thanks to Wes Thomas' winner four minutes into the second period.

Billy Sharp scored the only goal of the game on his home league debut for Leeds United against Middlesbrough, while Rotherham United won the battle of the promoted sides, seeing off Wolves by the same scoreline courtesy of a Ryan Hall strike.

Norwich City, relegated from the top flight last season, bounced back from an opening-weekend defeat at Molineux with a 3-0 thumping of Watford, who saw Joel Ekstrand sent off in the third minute for an alleged elbow on Nathan Redmond.

Britt Assombalonga scored his first two goals for Nottingham Forest as they twice came from behind to secure a 2-2 draw with Bolton Wanderers, while Franck Moussa's stoppage-time strike saw Charlton Athletic beat Wigan Athletic 2-1 at The Valley.

Elsewhere, Jake Taylor's goal earned Reading a 1-0 win at home to Ipswich Town, and the clash between Sheffield Wednesday and Derby County at Hillsbrough finished goalless.