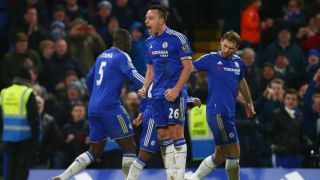 Guus Hiddink's unbeaten record since returning as Chelsea manager remains intact after John Terry dramatically struck in the 98th minute to secure a 3-3 draw with Everton in a remarkable afternoon at Stamford Bridge.

The Dutchman looked set for a first taste of defeat in his sixth game back at the Chelsea helm when substitute Ramiro Funes Mori put Everton ahead in the 90th minute, but Terry equalised deep into stoppage time to salvage a point for the defending Premier League champions.

An open contest saw just one meaningful effort at either end in the first half, but the match was spurred into life when Terry put a Leighton Baines cross through his own net shortly after the restart.

Kevin Mirallas - back in the squad for Leon Osman in one of three changes from Roberto Martinez – added to Chelsea's problems with a sublime second in the 56th minute.

Diego Costa - who limped off late on - and Cesc Fabregas put Chelsea on course to earn a point with a goal each in the space of two minutes shortly after the hour-mark, but Funes Mori put Everton back in front when he hooked beyond Thibaut Courtois in the final minute of normal time.

Once again, though, Chelsea were unperturbed and Terry atoned for his own goal by flicking an intelligent finish past Tim Howard at the death amid calls for offside from the visiting players.

Hiddink replaced Oscar with Nemanja Matic in his only change from Wednesday's 2-2 draw with West Brom, a move that offered Fabregas more freedom in midfield.

It almost paid dividends within 16 minutes as the Spaniard slipped the lively Willian in behind the Everton defence with a well-weighted pass, but the Brazilian's powerful strike was deflected over by Howard.

Everton threatened on the break with Hiddink's team guilty of giving the ball away cheaply, but it was not until five minutes before the interval that Martinez's side tested Courtois, who had to dive low to his left to keep Mirallas' effort out of the bottom-left corner.

The hosts started the second half strongly, but fell behind when Baines' low cross from the left caught Terry out and the Chelsea captain inadvertently sent the ball into the back of his own net.

Barkley came close to doubling Everton's advantage shortly after when his near-post effort crashed off the upright, but Mirallas did add a second when he expertly controlled another Baines cross and followed it up by lashing the bouncing ball beyond Courtois.

Chelsea's response was brilliant, however, and by the 66th minute they had restored parity with two goals in quick succession

First, Costa capitalised on Phil Jagielka's indecision to sneak between the centre-back and Howard and the striker then returned the favour for Fabregas, producing a clever backheel to find the Spaniard, whose deflected shot from the edge of the area snuck inside the near post.

Everton looked to have found the winner in the final minute of normal time when Funes Mori hooked Deulofeu's deep cross into the back of the net.

However, Terry latched onto Oscar's header inside the box to score a sensational equaliser with 98 minutes the clock despite calls for offside.

- Roberto Martinez managed his 250th Premier League game on Saturday, becoming the 21st manager to reach this landmark in the competition.
- John Terry made his 700th appearance for Chelsea in this match (all comps).
- Terry has now registered four Premier League own-goals for Chelsea, more than any other player for the club.
- Kevin Mirallas has bagged three goals in his last five appearances for the Toffees in all competitions after netting just once in his previous 15 for the club.
- Diego Costa has netted five goals in his five appearances under Guus Hiddink this season (in all competitions) after bagging just four in 21 for the Blues this season before his arrival.