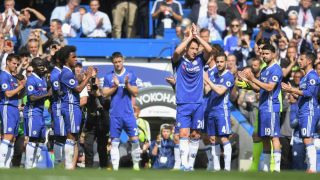 John Terry bid an emotional farewell to Stamford Bridge on Sunday, the Chelsea captain substituted on 26 minutes in his final appearance at the stadium as they capped off a title-winning Premier League campaign with a 5-1 win over relegated Sunderland.

The curtain on Terry's Chelsea career will come down at next weekend's FA Cup final with Arsenal, and his send-off in his last game at the London club's home received top billing, the action on the pitch reduced to the role of an eventful sideshow.

After Chelsea called for his withdrawal on minute 26 - the number he wears on his shirt - Terry was embraced by his team-mates in the middle of the field, taking in a standing ovation from the crowd and receiving a guard of honour as he left the field.

A Sunderland opener will not have been in the script for Chelsea's final-day party, but Javier Manquillo's third-minute effort will be remembered as little more than a footnote after Chelsea fought back to win comfortably against the league's bottom club.

Willian equalised in the eighth minute and, after Chelsea spurned a host of chances to make it 2-1, Eden Hazard finally did so with a fine finish in the 61st minute.

The Wearsiders had performed relatively well, but a piece of abysmal defending from Joleon Lescott allowed Pedro to add gloss to the scoreline, the former Barcelona man then turning provider for Michy Batshuayi for the first of the substitute's late double as the champions ended the season on 93 points.

Sunderland fans will be pleased to see the back of a tortuous campaign, but they were given something to celebrate in the third minute when Manquillo lashed in after Sebastian Larsson had seen his free-kick blocked.

Marcos Alonso's set-piece aim was markedly better than that of Larsson and, though he was denied by the crossbar, the visitors failed to clear their lines and Willian fired in at the near post.

Chelsea would have completed a quick turnaround had Hazard been able to make contact with Diego Costa's pull back with the goal at his mercy.

Alonso had an effort parried by Jordan Pickford before Costa fired wide after being picked out by David Luiz as Chelsea's onslaught continued.

An entertaining game then gave way to Terry's early exit, the long-time skipper visibly emotional as he left the field to be replaced by Gary Cahill.

Willian continued to have a heavy influence on proceedings once the contest resumed, his curling effort deflected narrowly wide by Billy Jones.

For all Chelsea's dominance and the focus on Terry, Sunderland did carry a threat to spoil the party and only a lack of direction on a close-range John O'Shea effort prevented them from retaking the lead.

Jack Rodwell's header six minutes after the restart had Thibaut Courtois scrambling to preserve parity, yet it was Pickford who was the far busier goalkeeper and he would have been picking the ball out of the net if David Luiz had been able to get a touch on Victor Moses' fizzed cross.

Chelsea did complete the comeback in fine style just after the hour through Hazard, who collected a lay off from Costa and arrowed a strike across goal and into the bottom-right corner to cap a fast counter-attack.

Pedro had a more simple task to make it 3-1, Lescott heading a long ball forward over the head of Pickford and into the path of the Spaniard to nod in before he played in Batshuayi to slide in a fourth.

Batshuayi scored the goal that clinched the title at West Brom and it was he who had the final say by cutting in from the right to power an impressive finish into the bottom-left corner.