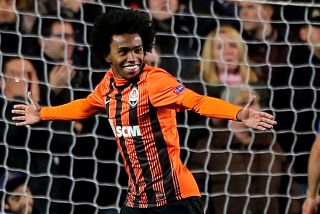 The 25-year-old had been linked with a move to Premier League rivals Liverpool and Tottenham during the transfer window, but the Stamford Bridge outfit have now won the race for his signature.

The Brazilian was officially presented by the club on Wednesday, after he was granted a work permit to play in England.

Willian told the club's official website: 'I'm very happy to be here, it's been a dream of mine to come and play here.