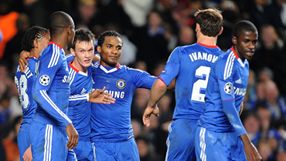 An equaliser from 21-year-old Daniel Sturridge and assured displays from 17-year-old midfielder Josh McEachran, 19-year-old defender Jeffrey Bruma and 20-year-old defender Patrick van Aanholt in the second half helped Chelsea to victory after going behind in the 19th minute.

GEAR:Save 10% on Chelsea's home, away and third kits, plus double winners' range

Florent Malouda scored a late winner to leave Chelsea with a maximum 15 points from their five matches, and guaranteed first place in Group F, followed by Olympique Marseille (9), who won 3-0 at Spartak Moscow (6). Zilina are bottom with no points.

Zilina went ahead through Babatounde Bello and held that lead until six minutes into the second half when Sturridge equalised with a close range effort in Chelsea's 100th match in Europe's elite club competition.

The London side then dominated the second half before finally getting the goal they deserved through Malouda's tap-in four minutes from time.

The result lifted some of the gloom over Stamford Bridge following the recent, controversial departure of popular assistant coach Ray Wilkins and three defeats in their last four Premier League matches which have sparked rumours over the future of coach Carlo Ancelotti.

He, however, was calm and composed after a win against surprisingly stubborn opponents, who lost by a record home Champions League score of 7-0 in their last group match against Olympique Marseille.

Ancelotti made six changes to the side that lost to Birmingham City on Saturday and was without injured or rested senior players like John Terry, Frank Lampard, Michael Essien and Alex, and gave some of his younger players a chance.

"We did not play well in the first half but we were very good in the second half and I was very pleased with the young players generally," Ancelotti told reporters.

"It was important to win and move on. We have now had 60 shots at goal in our last two games but only scored twice. We have been unlucky not to score more but the young players have had some good experience tonight and showed the quality they can bring to the team."

He singled out McEachran, a slightly-built creative England Under-17 midfielder who has been with Chelsea since he was eight, for his second-half performance.

"He was good defensively today but can play the ball long or short without a problem," he said. "He has to grow, he has to improve - but he is ready to play."

Chelsea hardly looked ready for anything much in the opening half but it was still a surprise when they fell behind when Bello, a 21-year-old Nigerian-born Benin international exchanged passes advancing up the field with Robert Jez before firing wide of goalkeeper Peter Cech's stand-in Ross Turnbull.

That was Zilina's first goal in the competition since their 4-1 home loss to Chelsea in September, and they continued to worry the English champions.

The home side gradually began to assert themselves with Sturridge prevented from an equaliser before half-time only by a superb save from Martin Dubravka.

At the start of the second half, Ancelotti replaced the only youngster to disappoi