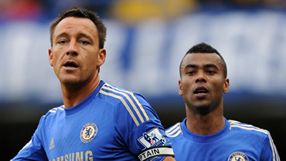 Di Matteo told reporters after the 4-1 Premier League win over Norwich City that the England left-back would be punished by the Londoners but he refused to go into details.

Cole is also likely to be disciplined by the FA.

"We've got a social media policy at the club and there will be disciplinary action," said Di Matteo after European champions Chelsea went four points clear at the top of the table.

"I did speak to Ashley but that's a private conversation. You saw his reaction yesterday when he apologised unreservedly."

Cole called the FA a "bunch of t***s" on Friday after being accused of "evolving" his statement supporting Chelsea team-mate John Terry's defence against the charge he racially abused Queens Park Rangers defender Anton Ferdinand in a game last October.

The Chelsea player removed the tweet within hours of posting it.

"I'm in favour of social media, it just has to be used sensibly," added Di Matteo after Cole played alongside Terry in Saturday's game.

"It's the world we live in and as long as it's used responsibly it's a good way to communicate. If the players breach a rule we have, there are going to be consequences."

As for the on-the-field action at Stamford Bridge, Di Matteo was delighted with his team's performance.

"We played some fantastic football, created a lot of chances and maybe could have scored a couple more," said Di Matteo. "Norwich are fighting for points and so are we and after we went 1-0 down it was crucial to get the equaliser quickly.

"It seems at the moment the players are enjoying their football. That's what they love doing and they are lucky people to be able to do this as a job."

Lampard's goal was his 129th in the Premier League for Chelsea, putting him level with Bobby Tambling as the club's highest top-flight scorers.

The England midfielder's day was marred when he went off with an injury early in the second half.

"Lampard felt a little problem behind his knee so as a precaution we took him off," said Di Matteo.

"We'll assess him tomorrow and see," the Italian added, casting doubt on the player's involvement in England's World Cup qualifiers at home to San Marino on Friday and away to Poland four days later.

Juan Mata was outstanding in midfield for Chelsea on Saturday and Di Matteo was surprised he had been left out of Spain's squad for their international fixtures.

"I feel for him because he's in great form," said the Chelsea manager. "I don't know the reasons why but we as a club are happy he is going to be with us over the next 10 days."