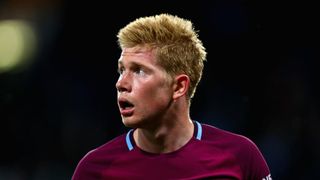 Pep Guardiola's City returned to the top of the table, above rivals Manchester United on goal difference, after De Bruyne rewarded the visitors' controlled dominance with a brilliant left-footed finish from 22 yards after 67 minutes at Stamford Bridge.

The 26-year-old is shining at the second attempt in English football, having left Chelsea in search of first-team football.

De Bruyne initially left on loan for Werder Bremen in 2012 before joining Wolfsburg two years later, where his form persuaded City to make him their club-record signing in August 2015.

"That's the past," he told BT Sport of a Chelsea tenure that amounted to three league appearances.

"What happened, happened. I've no regrets over coming here. It made me stronger in a lot of ways.

"I made a decision at the time, Chelsea made a profit and I did what was best for me."

On a fine City performance, within which he was named man of the match, De Bruyne added: "I think it was a very tactical game, very disciplined from both sides.

"We had more chances than Chelsea – not too many but a little bit. It's a nice goal.

"Everyone fought until the end and it's a very nice win because it's difficult to win here."

The France international had cruciate knee ligament surgery this week and Delph dedicated the win to his colleague.

"That performance was for one of our team-mates Benjamin," he told BT Sport. "He left us a message before the game and we did it for him. That's for you, big man.

"We knew coming into the game it was our toughest of the season but we had a game plan. We stuck to it.

"The plan was to stop them on the counter. I lost Willian a couple of times but I felt we did the job down to a tee.

"We knew we'd lost the previous two games to them and we needed to come out on top."