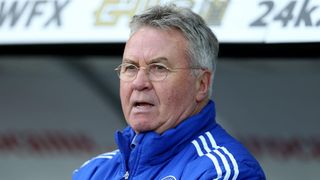 Guus Hiddink says Chelsea were not sharp enough in their 1-0 defeat at Swansea City on Saturday, but urged critics to recognise the club's current injury plight.

Chelsea were without the likes of Willian, Eden Hazard, John Terry and Gary Cahill through injury, while Diego Costa was suspended.

The situation prompted Hiddink to push John Obi Mikel into the back four for the second half, with Matt Miazga taken off after his poor clearing header fell kindly for Gylfi Sigurdsson to volley home in the first half.

But Hiddink, who suffered his first Premier League defeat since replacing Jose Mourinho in December, welcomed the opportunity to blood some of his younger players.

"Every defeat hurts but everyone knows the situation we are in, so there's a positive side to bringing in youngsters and seeing what they can do," he is quoted as saying by BBC Sport.

"We were attacking, attacking, but in the final third we were not sharp enough."

Only four points separate Swansea and Chelsea following the result, although last year's champions have a game in hand.