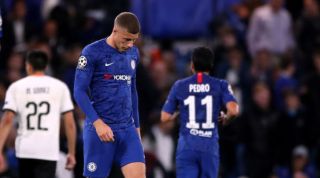 Valencia went 1-0 up through a Rodrigo goal, but the Blues were handed a golden chance to equalise when Fikayo Tomori's shot was handled by Daniel Wass in the penalty area.

Barkley stepped up to take the kick, but fired it over via the crossbar.

Post-match there was some dispute from fans and pundits alike as to who Chelsea's penalty taker should have been, but Barkley has defended himself.

"We've got a lot of good penalty-takers in the squad," said Barkley, as reported in the Daily Mail.

"On a sheet in the changing room, it says I'm on penalties when I'm on the pitch, otherwise it's Jorginho.

"All players feel confident of taking penalties, but we can all miss them."

Barkley remarked that the 'debate' between him and team-mates beforehand was more friendly than initially reported.

"I don't miss them in training and in pre-season I was scoring penalties. I've missed penalties before, when I was at Everton.

"I'm gutted I missed, but these things happen."

Chelsea face Liverpool on Sunday and ex-Everton man Barkley may well be hoping for the perfect redemption against his old rivals.

Why are so many players missing penalties? An expert's guide to scoring spot-kicks every time