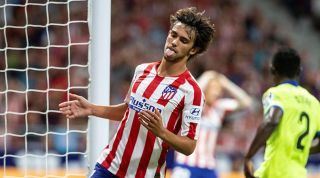 The 19-year-old shot to prominence in the second half of last season for Benfica, making such an impression that Atletico Madrid paid €120 million for his services.

Felix wasn't given many opportunities in the autumn of 2018, though, and has only played once in the Champions League proper so far. But that only means we have a treat in store.

Fleet-footed, a fine dribbler and deadly shooter, the versatile Portuguese starlet is a joy to watch and his developing partnership with Diego Costa is bound to be exciting.

Obviously. It’s hard to think of a more exciting teenager right now than Sancho, who is developing into a superstar at frightening speed. The winger's first two seasons at Borussia Dortmund have been magnificent in the Bundesliga, but he is yet to make a significant mark on the Champions League.

The Englishman should prove himself now that BVB have been drawn against Barcelona and Inter in the so-called Group of Death. Sancho must relish the opportunity, and Dortmund's home opener against the La Liga champions should be a cracker.

The Frenchman is 23 already, but this time it could be his breakthrough season. Coman has spent years in the shadows of Arjen Robben and Franck Ribery at Bayern Munich, and has been extremely unlucky with injuries as well.

But now he is expected to become a regular starter out wide for the Bundesliga champions. Coman is quick and blessed with immaculate technical skills, plus he's also a decent scorer – as the notable last-16 return leg fixture against ex-club Juventus in 2015/16 showed.

With the Robbery era over in Bavaria, Bayern's stage belongs to him.

The cultured midfielder famously missed Leverkusen’s last-16 game against Atletico Madrid in March 2017 because he had to attend an exam at his school.

Everyone knew that Havertz, just 17 at the time, was going to develop into a major star – but the rate of his progress has been faster than even the most optimistic expectations.

Aged 20, he is already a complete player who scored 20 goals in all competitions last season while dictating his team’s tempo and leading by example. Some say that Havertz is bound to be better than Michael Ballack, and it will be extremely interesting to test that theory against Juventus and Atletico Madrid.

You might not have heard a lot about the Slovenian playmaker if you’re not following Serie A – but that’d be a huge shame. Few players in the world possess a better left foot, and the midfielder is lethal when it comes to his passing range and dead-ball deliveries.

Ilicic has been deprived of Champions League football so far, having spent a decade at Palermo, Fiorentina and Atalanta, but at the age of 31 he is finally ready to take it by storm with the debutants from Bergamo.

Atalanta are a very exciting team to watch – nobody scored more goals in Italy last term – and Ilicic is pure magic when on song.

Josip Ilicic with the assist of the international break. That is pure undefendable. pic.twitter.com/3Tg7hGpnLM— Richard Wilson (@timomouse) September 6, 2019

Antonio Conte's Inter are facing a tough task against Barcelona and Borussia Dortmund, and a lot might depend on Sensi's performances in midfield. The little maestro, who arrived on loan from Sassuolo with an option to make the transfer permanent next summer, has made a superb impression in his first matches for the Nerazzurri.

A starter for the national team at the age of 24, Sensi is described by many as the leader of a new Italian generation thanks to his phenomenal vision and close ball control. Watch out.

Could Ajax keep it up after so nearly reaching the final last season? They lost two major stars in Frenkie de Jong and Matthijs de Ligt, but Dusan Tadic, Donny van de Beek and Hakim Ziyech are still in Amsterdam, and an extremely interesting prospect has joined them from Mexico.

Signed from America for €15 million, the 21-year-old Alvarez is already a vastly experienced player and started for his national team at the World Cup in Russia.

The versatile centre-back can also play as a defensive midfielder, and he’s been used at right-back as well. If coach Erik ten Hag deploys him in his most natural position, Alvarez is more than capable of seamlessly replacing De Ligt on his way to superstardom.

Benfica are famous for unearthing talent from their academy, and their new full-back is no exception. There’s a decent chance that Tavares will be the next big name to be sold for a hefty fee, despite only making his league debut for the first team last month.

But what a debut that was: the 19-year-old scored one and assisted two more in the Eagles’ 5-0 demolition of Pacos Ferreira. Not bad for a left-back who was playing on the right flank. The teenager is a fascinating talent.

Shakhtar Donetsk’s squad is a mix of Ukrainians and Brazilians, with just two exceptions – and one of them is this 20-year-old Israeli starlet whose purchase from Maccabi Petach Tikva last January was an extremely unusual one for Ukraine’s champions.

It might be because Solomon's style is quite reminiscent of a Brazilian, and he is seen as the brightest young prospect in his country since Yossi Benayoun. Two-footed, speedy, able to play on both wings and centrally, Solomon will be an intriguing player to follow.

The penalty-area predator was one of Europe’s most prolific scorers last term, netting 32 times in all competitions – including nine goals in 12 Europa League fixtures. Now he comes up against Liverpool, Napoli and Sazlburg – and a big transfer should be ahead if his scoring rate holds up.

QUIZ! Can you name all 36 teams to have beaten Pep Guardiola as manager?